With my father in mind, for whom Remembrance Sunday was essential to his identity, I was trying to write something about my deep misgivings about the tone and purpose of today’s commemoration of the end of World War One. In the end, I’ll settle for linking to Steve Arnott’s impassioned piece on the Facebook page of The Point, together with a poem by Wilfred Owen. 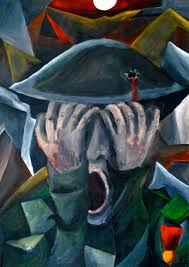 Is it just us? Or does anyone else out there feel that the ongoing sanitisation and revision of the brutal historical reality of the First World War more than just a little disturbing?

A pointless mechanised slaughter of millions of working-class boys and men of various nationalities at the behest of their own capitalist classes and various Royal Houses should be remembered as precisely that; and not some ‘jolly’ thing to be commemorated in Brit nationalist terms, with just the right amount of due saccharine sentiment to make a good family night in.

Even the return of the term ‘Great War’ must be suspect. It was the common descriptor prior to World War II – but since then the normal way of referring to the conflict has historically been as World War One. Given that ‘great’ has more than one meaning, the creeping return to the use of the old term seems to us to be part of the sanitisation and revision of this organised mass murder in the cause of profit and Empire (on all sides); part of the none-too-subtle attempt to recast this war as somehow a ‘just’ war. In the way most people understand the word in modern times, the First World War was anything but ‘great’.

And where is the remembrance of the fact that in almost every nation participating ordinary working people, soldiers, sailors and the poor rose up against the war at the end, and against their own national ruling classes that had fomented and promoted the whole horrific, blood and mud-soaked, infernal farce?

No culturally appropriated poppy is needed to remember my great-grandfather, who lied about his age to join up and fought in the Somme at age 16, survived and went on to become a lifelong and unrepentant communist till his death in 1986. And the many like him who both lost their lives and who survived to live with the trauma for the rest of their adult lives.

The ultimate sacrifice? For what? Imperialism and the hubris of Empire?

The entire British ruling class should have been put on trial for this war crime that used their own people as machine gun fodder, like cattle to the slaughter.

BY WILFRED OWEN
Bent double, like old beggars under sacks,
Knock-kneed, coughing like hags, we cursed through sludge,
Till on the haunting flares we turned our backs,
And towards our distant rest began to trudge.
Men marched asleep. Many had lost their boots,
But limped on, blood-shod. All went lame; all blind;
Drunk with fatigue; deaf even to the hoots
Of gas-shells dropping softly behind.

Gas! GAS! Quick, boys!—An ecstasy of fumbling
Fitting the clumsy helmets just in time,
But someone still was yelling out and stumbling
And flound’ring like a man in fire or lime.—
Dim through the misty panes and thick green light,
As under a green sea, I saw him drowning.

In all my dreams before my helpless sight,
He plunges at me, guttering, choking, drowning.

If in some smothering dreams, you too could pace
Behind the wagon that we flung him in,
And watch the white eyes writhing in his face,
His hanging face, like a devil’s sick of sin;
If you could hear, at every jolt, the blood
Come gargling from the froth-corrupted lungs,
Obscene as cancer, bitter as the cud
Of vile, incurable sores on innocent tongues,—
My friend, you would not tell with such high zest
To children ardent for some desperate glory,
The old Lie: Dulce et decorum est
Pro patria mori.

The Latin phrase is from the Roman poet Horace: “It is sweet and fitting to die for one’s country.”

OF COURSE, WE MUST REMEMBER